Jason Lafauci (he sometimes goes by Jason Laface) is a strange character. We first ran into him last September, when he was spouting off insane conspiracy theories about the mayor, SACY, the Health Unit and Antifa colluding to hand out needles and get kids addicted to opiates.

While these posts were extremely funny, what really caught our attention was his friendship with local members of Soldiers of Odin and that he spoke of wanting to be the People’s Party of Canada’s man for Sudbury. With both of those things in mind, we decided that Jason might be worth keeping an eye on.

Fast forward a little while, and Jason has indeed made good on his ambition to be the People’s Party of Canada representative for Sudbury. While his conspiracy theories are silly and easy to dismiss; Jason’s other rhetoric often veers toward downright hateful and even violent.

Jason has many social media accounts and we doubt that we have even noticed all of them. Most of the content on them essentially amount to advertising for his business selling Cannabis products. In fact, the Twitter account for the People’s Party of Canada Sudbury appears to be one of those accounts that Jason has simply renamed.

Jason also claims to be indigenous and is a big proponent of indigenous sovereignty, a stance that puts him at odds with his own party. We do not question Jason’s indegenity at all, but being a member of one marginalized group does not get one off the hook for promoting bigotry towards others. At one point, we even observed a fellow party member intervene to remind him that the People’s Party do indeed support pipelines. 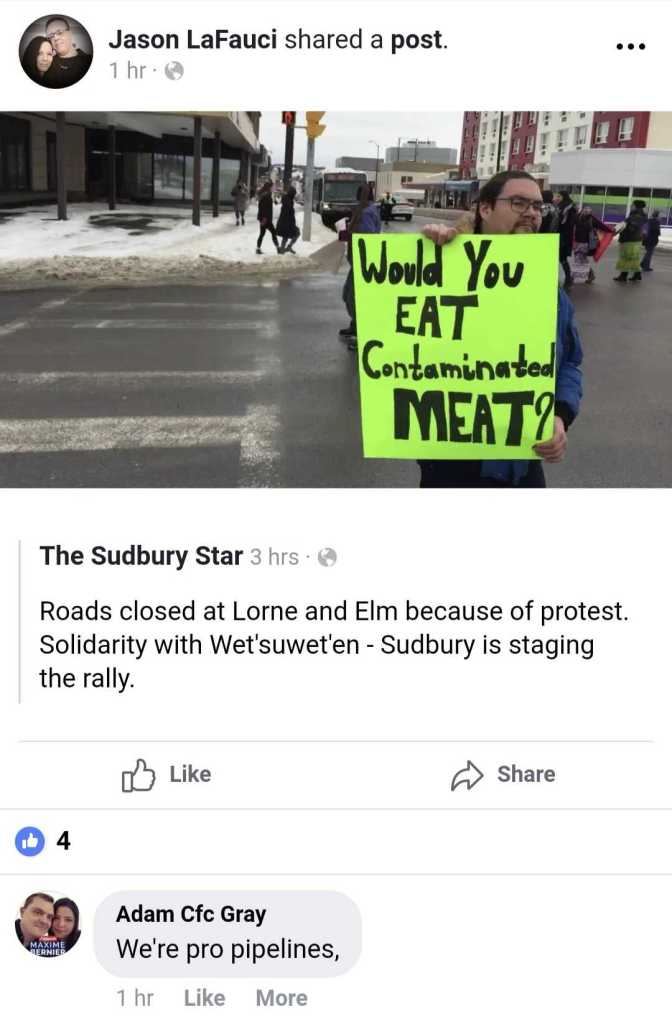 Most of his activism is crass and opportunistic. Like the Soldiers of Odin, Jason has seized on the opiate epidemic and the accompanying issue of used needles left in public places to try and make himself politically relevant. For a guy who advocates 24/7 consumption of Cannabis, he doesn’t seem to have a lot of respect for other drug users.

It is doubtful that Jason is actually serious at all about seeking political office, especially when he spends so much of his time badgering the local politicians and members of the media that he would be working with in such a role. Jason is not going to be Mayor in any forseeable future. If he were not involved with the PPC, we would regard him as simply an annoying local nutbar. With that said, the risk with Jason is that he will be able to use his membership in a registered political party to gain a greater platform for spreading his views, which is exactly what happened when CBC Sudbury granted him a softball story recently.

For this reason, we consider him a person that we have to take seriously, however ridiculous he may seem at times, and we intend to keep a close eye on him.

UPDATE(22/09/19): After making a ill-advised post on Facebook suggesting that the Prime Minister should be hanged; Jason asked to leave the People’s Party of Canada. We were initially skeptical and thought he might come back after the heat died down, but some time has passed now and it does indeed look like he’s out. It was never our intention to get him kicked out but we do think that they pretty much did him a favor by doing it because the PPC is a giant disaster. Unfortunately, we do still see Jason in our travels and he was recently out on a needle clean up with the Soldier’s of Odin.