Yesterday city councillor Robert Kirwan appeared on CBC Radio’s Morning North program to discuss the Soldiers of Odin being banned from Facebook. Local Green Party representative Steve May helpfully transcribed his remarks. It feels ridiculous for us to have to respond to someone that admits they haven’t been paying attention to what’s been going on and don’t know what they’re talking about, but such is the state of discourse here in Sudbury and here we are… 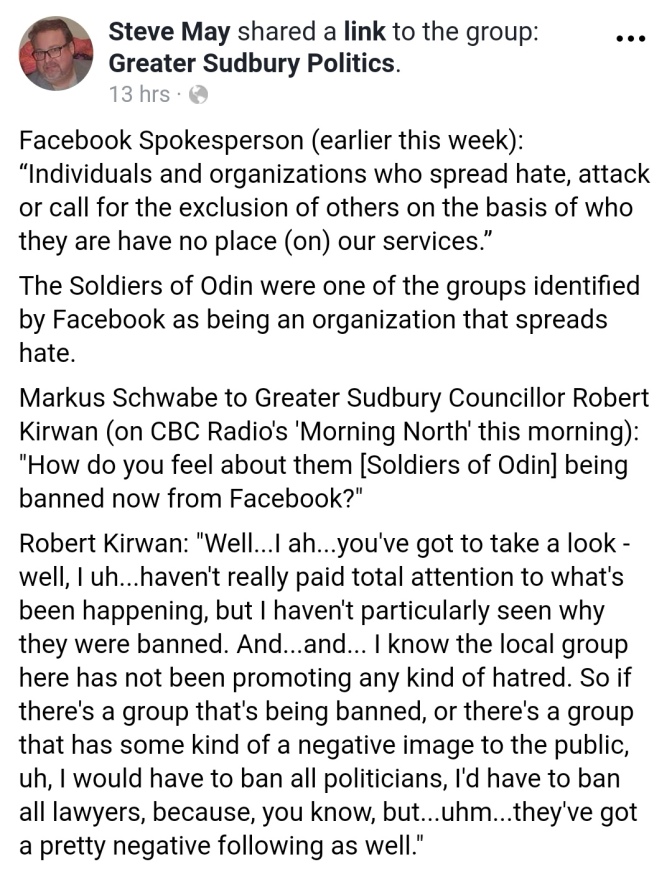 This is not the first time that Councillor Kirwan has defended the Soldiers of Odin and he has already been repeatedly criticized for publically supporting the group and allowing them a platform in the Valley East group that he is the administrator of on Facebook.

In fact, he was just recently called out on this last month.

At the time of this writing the Valley East group has 14,406 members, making it a very large local platform. Kirwan laments that a major social hub frequented by hate group members that is run by a local politician has somehow become politicized, which of course, is a absolutely absurd argument. He also claims that the local Soldiers of Odin have never promoted hate, which is completely false.

It is completely unacceptable for an elected official to be supporting the Soldiers of Odin at all and to be spouting off utter nonsense about issues that even they admit they are not informed on. We call on Councillor Kirwan to do some actual research into who the Soldiers of Odin are, to denounce them and their views, and to permanently ban their members from his Valley East group.