You’ve probably heard a big deal being made about Facebook allegedly banning white nationalist groups from it’s platform. It’s been about a month since then, so we thought we’d check in on some of them and see how they are doing now that they and their ilk no longer have a place on Facebook.

We can see pretty clearly here that local SOO member Richard Pacey is still on Facebook and is continuing to use the platform to promote the group and try to recruit new members. We also see the now familiar conspiracy theories about the Sudbury District Health Unit in the mix. (For a good time, ask them where they get their sharp bins from, or where they take those needles after they collect them.. )

His username on Facebook just happens to also be “S.O.O.Recruiting.Sudbury”.

We’ve reported this profile and others of local SOO several times(including after the “ban”), and each time we’ve received responses from Facebook saying that they do not violate any rules 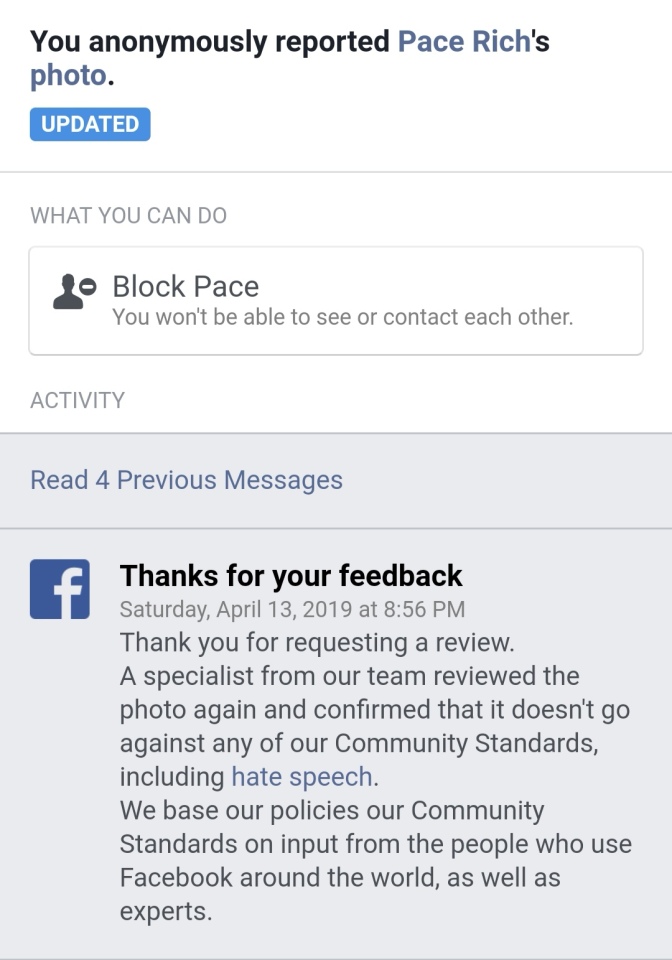 We got this reply five days after their “ban”. You can’t make this stuff up, folks.

We’re of course going to try again, but so far to us this new policy change from Facebook just looks like a big joke. As a matter of fact, not a single one of our local SOO members have been banned.

Wicked ban. What was the point of that, again?

In the meantime, since we aren’t holding our breath with regards to Facebook doing anything about these guys; we’re going to try to get down to the Junction Creek trail where they’ve been active most recently to check if they’ve left any of their markings around, remove those, and leave a few of our calling cards.

And just so we’re clear: to hell with Facebook.