Despite being repeatedly criticised for doing so, Sudbury city councillor Robert Kirwan is still providing the local Soldiers of Odin (SOO) chapter with a platform in his Valley East group on Facebook. The SOO are also supposed to be banned from Facebook, but as you can see that hasn’t really happened. The SOO are on Facebook in exactly the same places that they were before.

The SOO were out again this past weekend doing another one of their needle clean ups. While the clean up itself was pretty typical and uninteresting, the discussion online brought up an interesting subtext that we have remarked on a bit before. 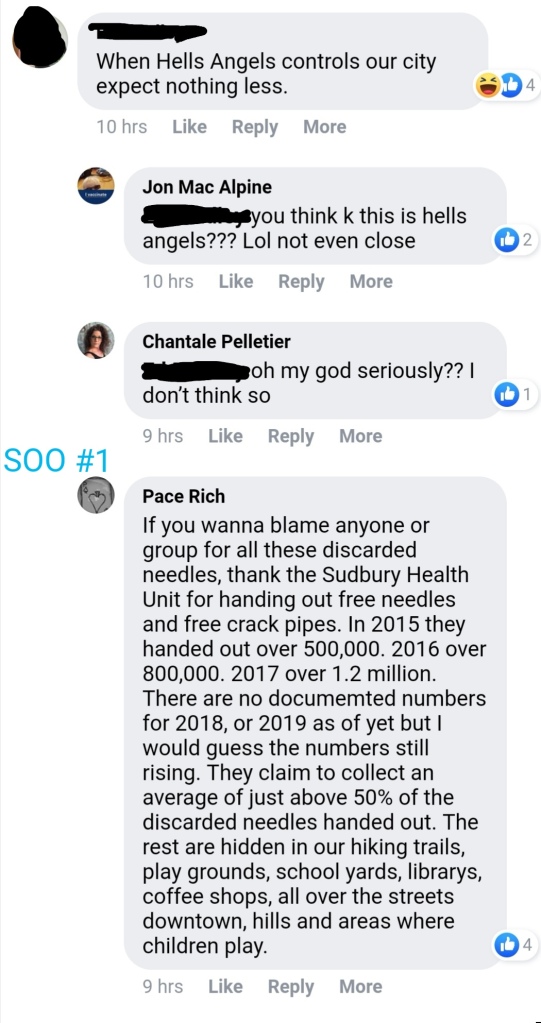 There is a lot going on here. First, we see SOO member Richard Pacey deflect from the question of who is supplying the drugs and blaming harm reduction services. Essentially, trying to shift the issue away from the drugs themselves and on to the paraphenalia used to consume them. Nevermind the issues of supply, criminalization, lack of recovery services – the problem is the needles themselves.

When the original poster returns to the thread and states the obvious, two more SOO enter: 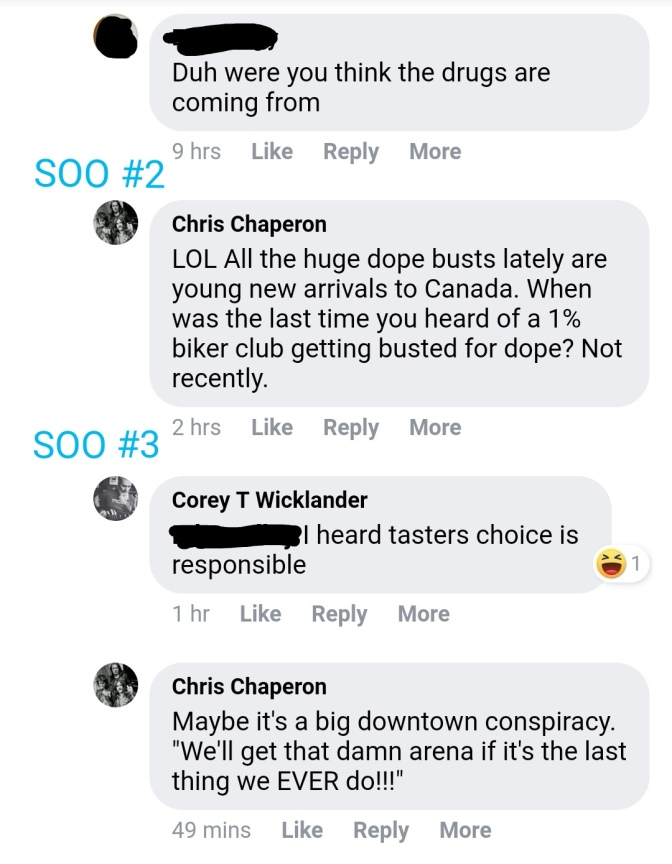 First, Chris Chaperon predictably tries to blame the problem on immigrants. We emphasize that he’s responding to a person who mentioned the Hell’s Angels by name and that in referring to “1%” is specifically referring to criminal biker gangs. You can do a few simple Google searches for yourself if you doubt that criminal biker gangs have been busted for trafficking Fentanyl. Corey Wicklander then comes in and does his usual ridicule and is more notable for showing up than what he says.

The circumstances of all this are pretty absurd when you put them all together: A hate group that are supposed to be banned from Facebook, promoting themselves and defending organized crime in a Facebook group run by a local politician.

But that’s Sudbury and that’s the bullshit we have to deal with here.

At the same time: a rather boilerplate statement on organized crime put out by the Ontario Provincial Police brought out strong reactions from some of locals.

Here we see quite a few individuals that we are already familiar with from monitoring the far-right in Sudbury. We’re going to run through a few of the most notable.

Jason Lafauci will already be familiar to our readers. He’s the former People’s Party of Canada rep for Sudbury and he likes to hang out with the Soldier’s of Odin. We’re not exactly fans of the police ourselves, but his take here is just ridiculous.

In the post’s likes we find a few familiar faces:

There’s no evidence that anyone named in this post are involved with any criminal activity and it’s not illegal to express support for criminal biker gangs, but we found this all this interesting given that this crowd are usually pretty gung ho about law and order.

We can see that there is definite overlap between support for the far-right and support for organized crime and it is not solely confined to the Soldiers of Odin. We would speculate that this attraction to outlaw motorcycle gangs has much to do with what they as institutions symbolize. Perhaps this support for law and order AND organized crime is really not so contradictory at all in their eyes and is indicative of their desire for a particular kind of colonial, white supremacist, patriarchal order: one where the law of the land and criminal biker gangs can sit comfortably side by side, not as diametrically opposed forces, but as twin upholders of order, two sides of the same coin, so to speak.

Or maybe it doesn’t indicate anything at all.

As always, your mileage may vary and you’re welcome to have your own opinion.

One thought on “Far-Right Support For Organized Crime”